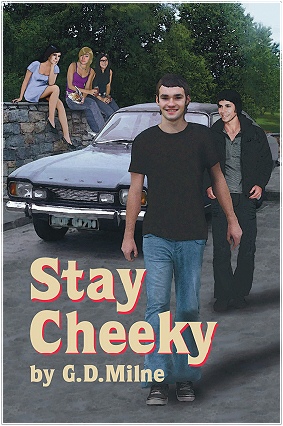 Stay Cheeky is a humorous story of growing up in the sixties and seventies in a country community on the outskirts of the city.

The book follows the escapades of Vince and his cheeky chums as they stumble and laugh their way through primary school and on to secondary school and then as young adults at work.

There are eight characters whose lives are intertwined from an early age. They start their friendships at junior school and move on to the academy with little regard to the education which the teachers are trying to instil in them. As they quickly mature, the race is on to join The Stupid Grin Club.

Grandma O’Donnell confesses a secret to Vince and the hunt is on for hidden treasure.

Sadness creeps in at an unexpected death.

The story is written in a refreshing down to earth style. Most readers should be able to associate with some or all of the characters in the story.